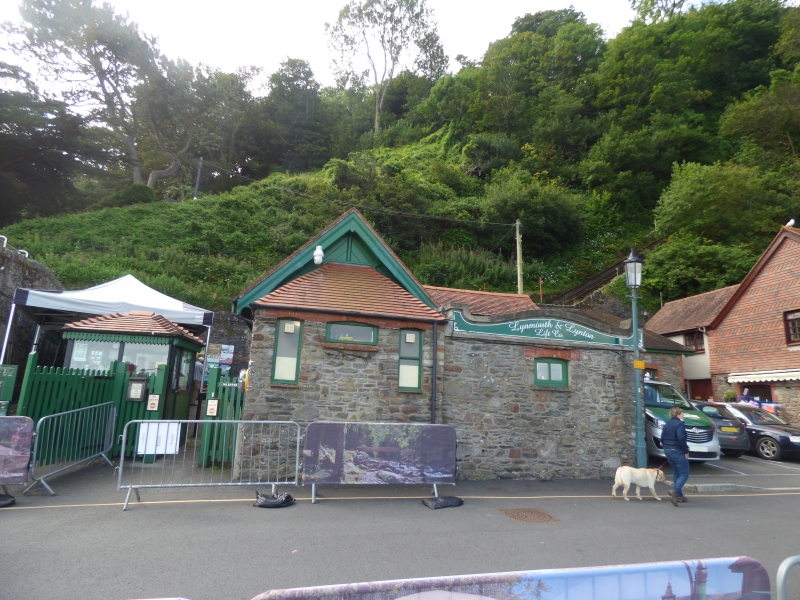 Lynmouth Bay Station from The Esplanade.

Waiting room with attached workshop, at lower end of Cliff
Railway. 1890. Paid for by Sir George Newnes, built by Bob
Jones. Timber-framed, rubble, asbestos-cement slate roof.
A rectangular pavilion with deep projecting decorative gable
to the S side, at the foot of the railway. This front has a
diagonally-boarded gable behind an open truss with curved
braces and barge-board, over a large plate-glass light and
narrower light each side of a framed door with diagonal
planking. The return has 4 similar glazed panels, each with a
flanking narrower light in the upper half, but the first and
third panels have diagonal boarding. The frame members are of
square scantling, with chamfered members to run-out stops at
each junction. The outer gable, facing the Esplanade, has the
diagonal boarding, but is blocked below by a later service
block. To the W of the main pavilion is a small workshop in
rubble, extended by a later lean-to.
INTERIOR: has a concrete floor, and is in 2 bays with a
king-post roof truss with cross-bracing, all the members with
stopped chamfers, as the main framing.
HISTORICAL NOTE: the pavilion is little changed, and still
serves its original purpose. It originally had a tiled roof,
and is similar in style to the Upper Waiting Room, Lee Road
(qv). The railway was opened on Easter Day, 1890. It was
funded by Sir George Newnes, and built by Bob Jones. The
builder's grandson, still working for the railway, says that
"Newnes' money and Jones' brains built Lynton and Lynmouth",
which included this work.