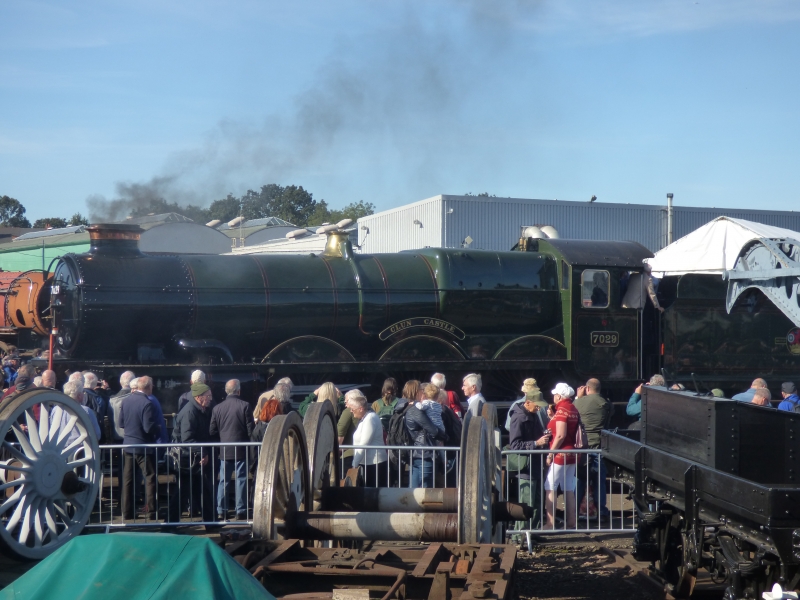 
The steam locomotive 7029 Clun Castle fully restored and seen at the turntable at Tyseley.

Its first shed allocation was Newton Abbot, and had a double chimney and a 4 row superheater fitted in October 1959. Its most famous moment came on 9 May 1964 on the Plymouth to Bristol leg of a special train to mark the record set sixty years earlier by "City of Truro" when it was timed at 96 mph on the descent of Wellington Bank in Somerset. Its last shed allocation was Gloucester in May 1965. It hauled the last official steam train out of Paddington (to Banbury) on 11 June 1965. It was officially withdrawn in December 1965.

Bought for its scrap value of £2,400 by Patrick Whitehouse in 1966, its ownership was then passed to 7029 Clun Castle Ltd. In preservation, it has always been based at Tyseley TMD, now Tyseley Locomotive Works.

In 1967, carrying a Great Western livery, it hauled trains to mark closure of the GWR route to Birkenhead, from King's Cross to Newcastle and over the Settle-Carlisle Line. In 1972, it joined in the "Return to Steam" tours. After a major overhaul, it emerged in British Railways livery in 1985. In 1986, it hauled the last train from the old Birmingham Moor Street station. In the mid 1980s, some of the restoration work was undertaken by a government funded Community Programme scheme, managed by Sandwell Metropolitan Borough Council.

It returned to service in October 2017 at the Tyseley Open Weekend in authentic BR Lined Green with the late crest on its tender.

7029 is presently not mainline certified but is able to run round the Tyseley site.