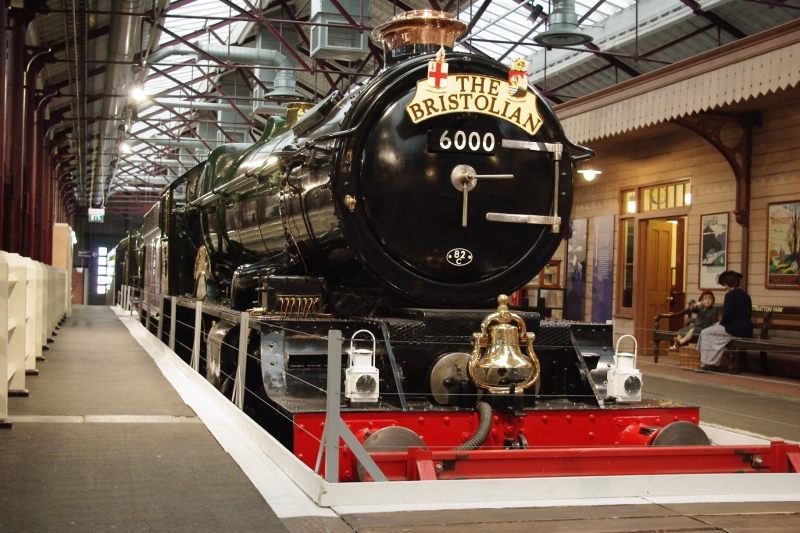 Taken 04/03/19; looking at the modern railway, it is difficult to both envisage the efforts of the publicity departments of the 'Big Four' and how steam locos could capture the public imagination. The GWR used their only pacific loco, Churchward's 'The Great Bear', as much for publicity purposes as for its usefulness (its performance was not spectacular in reality) until the introduction of the Castle Class locos allowed them to quietly withdraw it and rebuild it. No doubt Collet saw an operating case for a more powerful loco than the Castle's and equally the GWR's General Manager Sir Felix Pole wanted a loco with a tractive effort greater than 40,000lbf for PR purposes. I'm not technical enough to describe the cylinder bores and smaller wheels that allied to the larger boiler managed to get the first six Kings above the magic 40,000 mark. Anyway it is probably irrelevant as after their first overhaul the first six were fitted with new outside cylinders that reduced their traffic effort down to just below 40,000lbf.

Built at Swindon in 1927, No. 6000 qualifies as a celebrity loco. Originally intended to named after a cathedral, once the GWR had accepted an invitation to display the loco at the Baltimore and Ohio Railroad's centenary celebrations the name of the reigning monarch was deemed more suitable. The bell above the buffer beam is a memento of this trip.
Once back in the UK the loco was allocated to Old Oak Common. Reallocated to Bristol in 1950, it returned to Old Oak Common in 1959, from where it was withdrawn in 1962 and preserved as part of the National Collection. Its preservation career falls into distinct sections; main line operating from the Bulmer's Railway Centre in Hereford, Static display at Swindon, then at the NRM York and then back to STEAM in Swindon. Whilst some may regret that the loco is now a museum piece, overhaul to running order would have been costly, would have duplicated classmate No. 6024 on the main line and, due to modern loading gauge constraints, have involved the loco being reduced in height. At least incarceration inside STEAM means the loco retains its original dimensions.