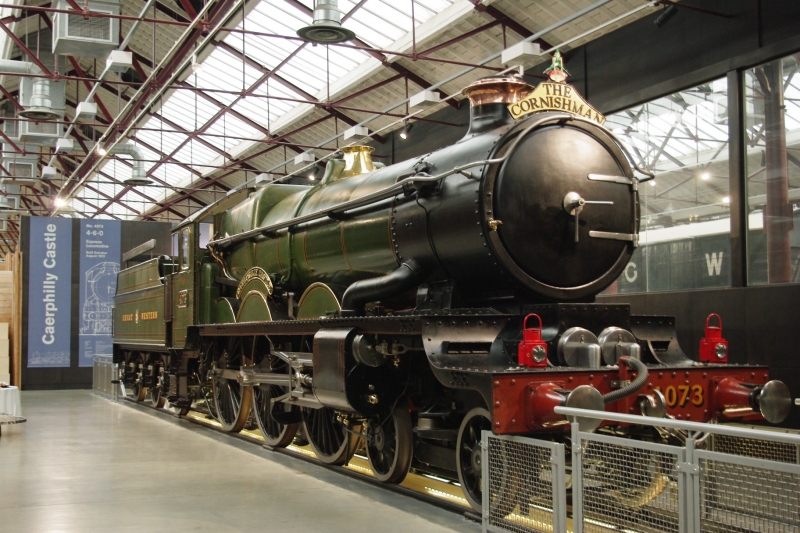 Taken 04/03/19 and as hand held museum shots go, I'll take this one! The first time I've seen 'Caerphilly Castle' since its days at South Kensington's Science Museum.
No. 4073 is the doyen of the GWR's 4073 or Castle class of 4-6-0s (the numbering system for the Castle followed on directly from the numbering system for the Saint Class). No. 4073 is not a porotype as such, as Collet placed an order for the first ten of the class to be produced in 1923, although there was a four month gap between No. 4073 being outshopped in August and the next loco appearing, presumably to allow time to correct any teething issues.
,After a brief period of running-in service No. 4073 was exhibited at the British Empire Exhibition, which was held at Wembley Park, Wembley, north-west London. Its first shed allocation was Old Oak Common and it was withdrawn from Cardiff Canton in 1960, it was made part of the National Collection and refurbished for display purposes at Swindon Works. However, in 1961 No. 4073 was formally handed over by, of all people, Dr Richard Beeching at Paddington Station to the director of the Science Museum. Pickfords hauled the engine to the museum in Kensington, then placed on display in the new extension, in the transport section.
After the Science Museum decided to refurbish its displays, and focus on moving and interactive exhibits, it was decided to move the locomotive to the STEAM Museum at Swindon. Via a detour to the National Railway Museum at York, No, 4073 was installed at Swindon as a centre piece for the museum's opening in 2000.