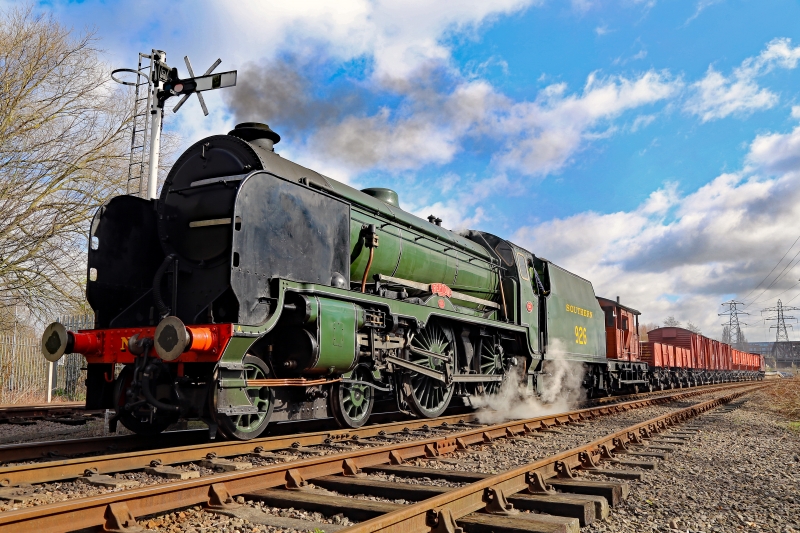 Southern Railway Class V 'Schools' 4-4-0 steam locomotive no 926 'Repton' in Southern Railway Olive Green livery prepares to leave Peterborough Nene Valley with the 10:25 freight driving experience service to Wansford. The engine was on loan to the Nene Valley Railway from the North Yorkshire Moors Railway, for use in the NVR's Southern Steam event the previous weekend.

Designed by Richard Maunsell for the Southern Railway in 1930, the 'Schools' class were all named after English public schools. 926 ‘Repton’ was completed at Eastleigh in May 1934. After a spell at Bournemouth it operated from Fratton (Portsmouth) depot until the Waterloo-Portsmouth route was electrified in July 1937. It was then one of 10 ‘Schools’ transferred to Bournemouth for use on London expresses. It remained at Bournemouth for most of the war, being used on the lighter expresses and, after the war, on inter-regional trains. Further electrification caused more moves of these locomotives and ‘Repton’ was withdrawn from Basingstoke depot, with the remaining members of the class, on 30 December, 1962, just two years after a major service.

Restored at Eastleigh by 1966, 'Repton' was donated by her purchaser to Steamtown USA in Vermont, who in turn loaned her to the Cape Breton Steam Railway in Canada. In 1989, she was sold again and returned to the UK for service on the North Yorkshire Moors Railway.