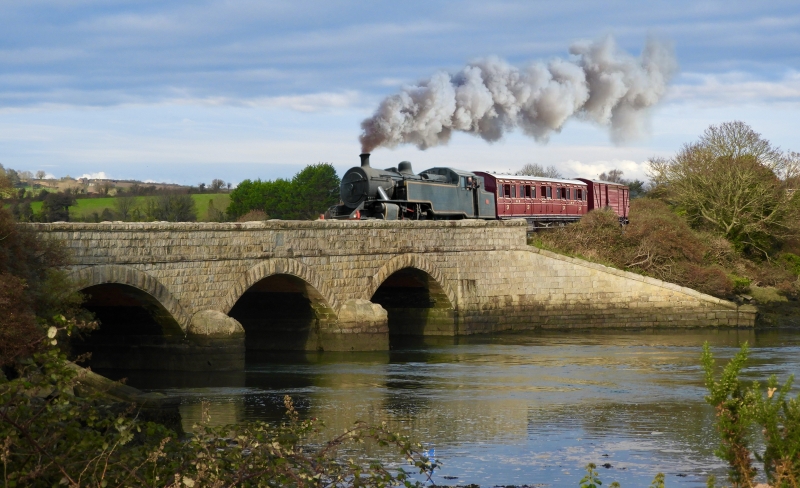 The railway line from Belfast to Downpatrick was opened on 25 March 1859, then, beginning in 1865 Downpatrick, Dundrum and Newcastle Railway extended the line from Downpatrick to Newcastle, opening on 25 March 1869, to facilitate the booming traffic in holidaymakers from Belfast to the resort town of Newcastle and Mourne Mountains. The line was operated successfully by the company until 14 July 1884 when it was absorbed into Belfast & County Down Railway. A branch to Ballynahinch was opened in 1858, and a branch line from Downpatrick to Ardglass opened in 1892, also constructed was a loop line near Downpatrick. This was a triangular shaped track layout, allowing trains between Belfast and Newcastle to collect and drop off passengers at the Loop Platform, who would then be ferried between there and the main station at Downpatrick by a local train. Thanks to the triangular layout, trains were still capable of operating directly from the main Downpatrick station to Belfast or Newcastle or Ardglass. A branch from Newcastle to Castlewellan was opened on 24 March 1906. In 1948 the entire railway system in Co. Down was closed, with the exception of the line between Belfast and Bangor, due to lack of government foresight and the rise in popularity of the private car. When closed the BCDR had 29 locomotives, 181 carriages and 25 other coaching vehicles, 629 wagons mostly covered vans and wagons but also including some 6-wheeled fish vans, and 54 service vehicles. Parts of the original trackbed, now a walking and bicycle route, is owned and maintained by the National Trust
( thanks to Railway preservation Society of Ireland, and others, for locomotive photos, Background photos from my own collection )