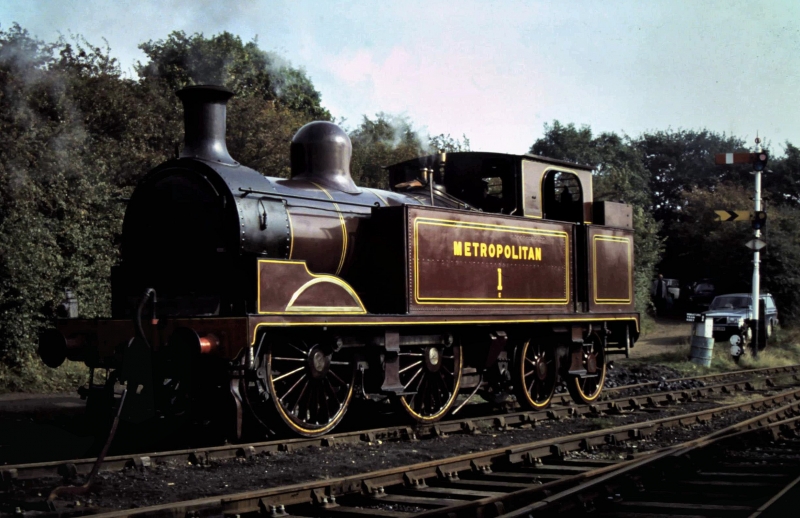 Scan of a slide taken in October 1991; I've sometimes wondered which steam loco I've snapped the most, something that the ease and relative cheapness of digital photography will have skewed. However, of my film era snaps 'Met No. 1' must be a contender.

Previously I've written up a history of 'Met No. 1' from scratch, but this time the following is a straight lift from the Buckinghamshire Railway Centre website:

"The Metropolitan Railway, a substantial part of which now forms the Metropolitan Line of the London Underground, once had a fleet of steam locomotives. The steam classes saw most use on surface lines, although trips underground were part of the daily routine for most types.
No. 1 is the only survivor of a class of seven engines designed by the Chief Mechanical Engineer of the Met, Mr T. F. Clark, for use on the Baker Street to Verney Junction service. (Verney Junction was the Metropolitan Railway's furthest outpost, where it joined the LNWR Oxford to Bletchley line). No. 1, built in 1898, was the last locomotive constructed at Neasden Works. It was built as a replacement for "A" class 4-4-0T No. 1, which was broken up after an accident at Baker Street, at the junction of what is now the Inner Circle. Two identical locomotives, Nos. 77 and 78 were also built at Neasden, with a further four built by R & W Hawthorn Leslie of Newcastle in 1900-1. It seems likely that the class, designated "E", was to have been larger, as a gap was left in the list of locomotive numbers, the next number used being 90.
No. 1 and its classmates proved very successful and were more than capable of the work asked of them. On 4th July 1904, gaily decorated with flags and bunting it headed the first passenger train on the opening of the Uxbridge branch from Harrow on the Hill. The completion of the Metropolitan Railway’s electrification programme made more engines of the same type unnecessary and also led to the removal of the condensing apparatus which had been fitted for working in the underground tunnels. For over twenty years these locomotives were the mainstay of the Metropolitan services to Aylesbury, and still appeared after the introduction of larger engines, such as the "H" class tanks, in the 1920s.
From about this time the class was gradually used for less strenuous work on branch lines and freight and engineering workings, although all survived to be taken into London Transport stock when the Metropolitan was taken over by the London Passenger Transport Board on 13th April 1933. Met No. 1 became London Transport L.44, and it is known that by July 1936, though probably earlier, Met. 1 was repainted in London Transport livery. The duties of the class at this time included passenger services on the Chesham Branch, pilot engine at Rickmansworth, and goods transfer and engineering trains around Neasden.
Nos. 78, 79 and 82 were withdrawn in 1935, and No. 80 (L.47) in 1941, while the remaining three survived until 1963-4, when Nos. 77 and 81 (L.46 and L.48) were scrapped. In the immediate post war years L.44, L.46 and L.48 frequently worked the Baker Street to Aylesbury trains, possibly even getting as far as Quainton Road. These locomotives also frequently worked permanent way trains from Neasden, sometimes getting as far as Aylesbury to run round and take water. For example L. 44 was recorded at Aylesbury on 21st August 1955 on a permanent way train.
These much loved LT locomotives also became popular on tours and specials including the 50th Jubilee of the Uxbridge Line and the Railway World Special, which did reach Quainton. No. 1 survived to work the last steam train on the Chesham Branch in July 1960 and the last steam-hauled passenger train anywhere on LT in 1961. But it was another two years before the locomotive was withdrawn, after a final moment of glory when in took part in the Metropolitan Centenary parade at Neasden on 23rd May 1963, where it hauled four bogie coaches and a milk van.
An appeal, the Met Tank Appeal Fund, was set-up in 1962, originally to purchase the Metropolitan Railway 0-6-2 'F' Class locomotive L.52. This appeal changed its focus, as it was found that L.52 had a cracked mainframe, and L.44 was selected instead. The Met Tank Appeal fund was helped by the committee members of the London Railway Preservation Society (LRPS), a forerunner of the Quainton Railway Society. If it was not for the foresight of these preservation pioneers, we may not have an operational Metropolitan tank available today.
Following its final activities for London transport, L.44 was purchased by LRPS / Met Tank Appeal Fund. Met No. 1 was delivered in steam on 26th March 1964 to the LRPS's temporary store at Skimpot Lane, Luton. Whilst at this depot an attempt was made to prepare the locomotive for a live steam appearance at the Bedford Centenary Exhibition in October 1968. Some defective stays were replaced and the Bedford shed boilersmith made plans for an hydraulic test, but unfortunately the locomotive was not permitted to be in action for the journey or in steam at the Exhibition.
The locomotive was subsequently moved to Aylesbury, where she was stored for two years. Transfer by rail to Quainton followed on 23rd September 1970, with a track slew from the mainline into the Down Yard."