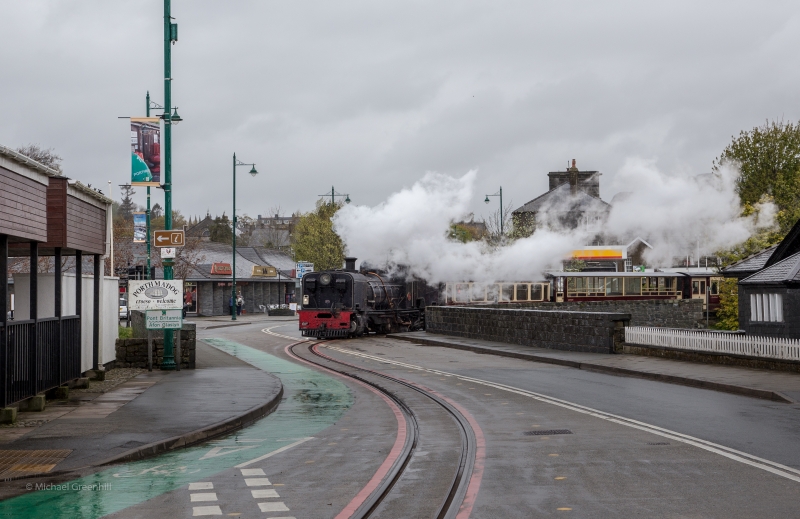 The Welsh Highland Railway (WHR) or Rheilffordd Eryri is a 25-mile (40.2 km) long, restored 1 ft 11 1⁄2 in (597 mm) narrow gauge heritage railway in the Welsh county of Gwynedd, operating from Caernarfon to Porthmadog, and passing through a number of popular tourist destinations including Beddgelert and the Aberglaslyn Pass. At Porthmadog it connects with the Ffestiniog Railway and to the short Welsh Highland Heritage Railway. In Porthmadog it uses the United Kingdom's only mixed gauge flat rail crossing.

The restoration, which had the civil engineering mainly built by contractors and the track mainly built by volunteers, received a number of awards. Originally running from Dinas near Caernarfon to Porthmadog, the current line includes an additional section from Dinas to Caernarfon. The original line also had a branch to Bryngwyn and the slate quarries at Moel Tryfan, which has not been restored. (This branch forms a footpath "rail trail", the lower section of which has been resurfaced and supplied with heritage notice-boards).

There is also the 0.75-mile (1.2 km) long Welsh Highland Heritage Railway which runs from Porthmadog along the trackbed of the former Cambrian Railways exchange siding and connects to the WHR main line at Pen-y-Mount junction.